We use cookies to make your experience better. To comply with the new e-Privacy directive, we need to ask for your consent to set the cookies. Learn more.

There was a time in the not so distant past that saying you’d ‘bring the vodka’ meant you’d be turning up with a bottle of Smirnoff. It was the vodka, the one everyone thought of.

Fast-forward a few years (it’s entirely relative…) and vodka is in the same sort of place as beer – it’s craft, it’s high-quality, and there are so many different varieties, flavours, infusions and brands that it’s easy to get a little lost when thinking about what you should buy. 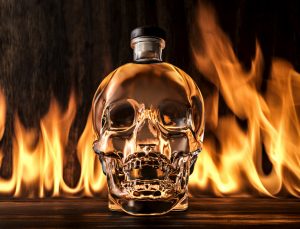 But between all the other glassware, there does seem to be one that stands out quite distinctly, probably because it genuinely looks like it’s eyeing you up and telepathically telling you ‘your friends will think you’re really cool if you turn up with my skull in your hands’.

Crystal Head vodka is the love-child of actor Dan Aykroyd and artist John Alexander. They two teamed up in 2007 with a crazy idea about distilling vodka through diamonds (I’m not even kidding). The idea was they’d make a vodka that was so pure, you didn’t want to buy an infused one – because this one tasted so damn good! 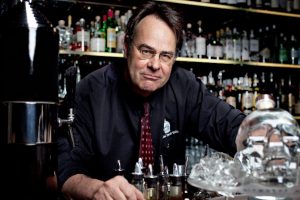 Tasting notes differ on what flavours come through – some say vanilla, some say black pepper and peaches, while one even says liquorice. But what they all agree on is it tastes damn good.

But then there’s how it looks – being based off the ‘ancient’ crystal skulls of myth and legend (widely debunked, but who wants to focus on trivialities?), the crystal head bottle was designed to catch your attention. Some U.S.A. retailers even went as far to say they wouldn’t sell it in case it was deemed offensive. Only in America…love their guns, hate shaped glass 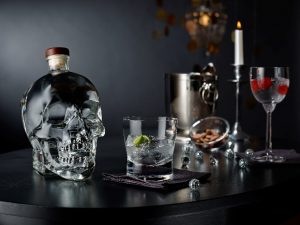 But I digress – back to the vodka itself. Other than being a tasty little number on its lonesome, people have come up with a number of delicious ways to enjoy it. Crystal Head’s website even has an entire section dedicated to educating anyone, from mixologists to Mary and Michel at home,how to make the perfect mix.

What’s not to like? A great tasting drink, a stylish bottle, and a suite of great-tasting cocktails to learn. And probably a little more of a conversation starter than you’d get walking in with a bottle of Smirnoff under your arm.

Crystal Head Vodka is available to purchase at: https://www.thedrinksbasket.com/crystal-head-vodka

Here at TheDrinksBasket we take great pride in being a one stop online retailer that specialises in the weird and wonderful of the drinks world. Whether you just want to keep your drinks cabinet well stocked, are getting set for a great dinner party or want to treat a loved one, we are sure to have a bottle to suit every occasion.
About Us
﻿